Horizons Regional Council and Palmy City Council are working together to improve passage for native fish in Gordon Kear Forest. 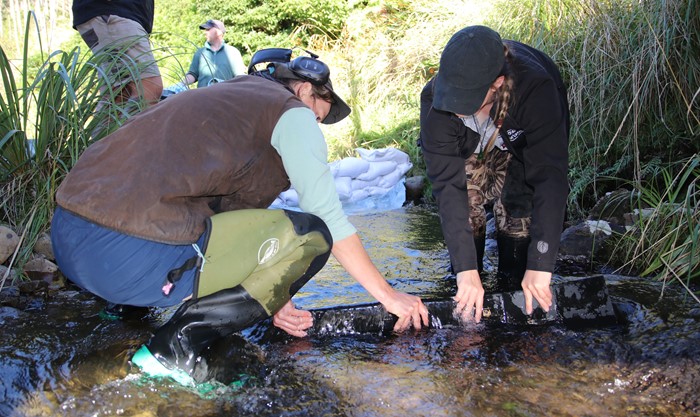 This work is part of Horizons’ Enhancing Native Fish Populations through Fish Passage Remediation project which was awarded $2.6 million through the government’s Jobs for Nature programme in July 2020.

Horizons has also contributed $300,000 towards the project which includes a dedicated native fish team who have traversed over 745 kilometres of the region’s waterways in the last financial year to assess structures that may be acting as barriers to fish passage.

Horizons research assistant Charlotte Minnis says work in the area has been underway since 2018 as part of the Manawatū River Leaders’ Accord Freshwater Improvement Fund to help fish migrate upstream in the upper Kahuterawa catchment.

“The Jobs for Nature funding has enabled us to build on this work and accelerate the monitoring of the 15 kilometres of waterways within Gordon Kear Forest to assess native fish to further understand habitat limitations,” says Ms Minnis.

“Through this assessment we identified barriers that are preventing native fish getting upstream to ideal habitat, which thanks to the Freshwater Improvement Fund programme and contributions from the city council, we have been able to address.”

Ms Minnis says native fish are burst swimmers that work their way upstream by swimming short distances to rest behind rocks and other natural breaks in streams.

“When they come across a smooth surfaced culvert that has a high-water velocity with no rest spots, or is a step up from the stream level, they’re unable to progress any further,” she says.

“While some of the barriers in the catchment have been fixed, we identified nine others during our monitoring. Over the past year we’ve fixed eight culverts and today we’ve completed the last one.”

Ms Minnis says the fixes included fitting baffles or rope inside the culverts or replacing them completely.

“The flexi-baffles installed in three of the culverts, and the spat ropes in the remaining two, create the conditions native fish need to rest and keep working their way upstream. The city council has also worked with us to have three culverts replaced to make them fish passable, as well as improve the road integrity of the crossings.

“This project is a great example of different organisations and funding streams working together to protect our native fish in the catchment. We hope to continue this work over the next few years and appreciate the contributions by both the city council and central government.”

City Council commercial advisory manager Fiona Dredge says older culverts in the forest are undersized for the catchment, which means they are unable to cope with heavy rainfall and more likely to cause damage to forestry roads.

Replacing these not only future-proof the forest infrastructure but strengthens the biodiversity of the forest.

"Replacing these culverts ensures access is maintained for all users, including emergency vehicles, pruning contractors and for logging trucks to transport logs out of the forest when it is time to harvest again," says Ms Dredge.

"In addition to protecting these roads from future damage, we are improving fish passage and enhancing the habitat for the fish species within the catchment - which we think is pretty cool."

Ms Dredge says there are 18 culverts in the forest. Six were replaced prior to this year, including three in 2018 that were done in partnership with Horizons.

"We have an annual budget of $25,000 to finish the replacement work, and funding from Horizons has enabled us to replace more culverts this year than our budget alone would allow.”